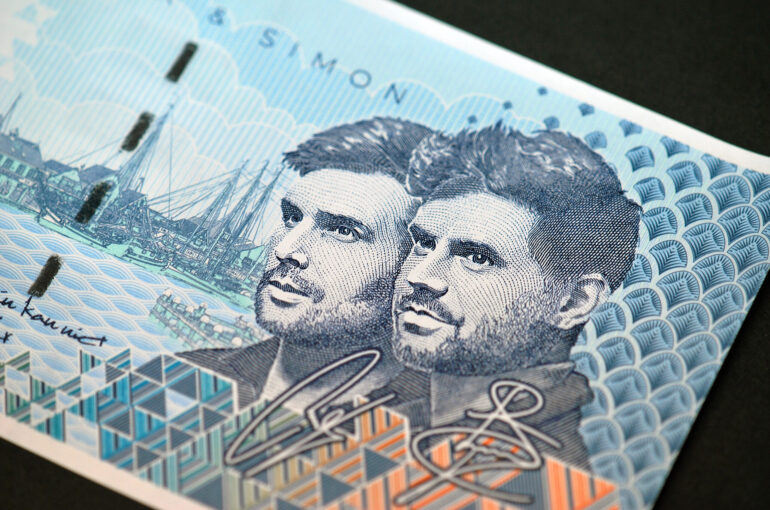 Sponsorship campaign for Dutch Epilepsy fund kicks of with a € 100.000 donation

The note is issued in a special cover with a personal letter from Nick & Simon. In the letter, they introduce the campaign: “Seize it together”, which supports Epilepsy NL to generate funds for research by issuing the Nick & Simon Tenner.

Proceeds from the sale of the ticket will go to EpilepsieNL to fund ground-breaking research. As an advance on the contribution, Nick & Simon handed out a check for 100,000 Euros to Joost Wijnhoud, director of EpilepsieNL and Miljuschka Witzenhausen ambassador of EpilepsieNL. “It is really fantastic and extremely valuable that Royal Joh. Enschede, Nick & Simon and everyone involved are generating funds for people with epilepsy,” said Wijnhoud. “Epilepsy disrupts lives.”

Simon Keizer on the campaign around the Tenner, app and charity: “Having your own note for ten No.1 albums is already a crown on our work, but the fact that our entire team can support EpilepsieNL this way completes the circle!”

The banknote is the first of its kind to provide access via an app to additional digital functionality, such as augmented reality, with which the owners of such a banknote can bring Nick & Simon digitally to life in various ways.

Gelmer Leibbrandt, CEO of Royal Joh. Enschedé: “Our expertise and craftsmanship are fully appreciated in this production. In addition to all the security features that were used for the guilder banknotes and the Euro, various innovative digital applications have been added in collaboration with the innovation agency Wij Doen Dingen.”

Klaas Nagel, Director of Wij Doen Dingen: “The team of Wij Doen Dingen is the front-runner in concept development, innovation and the latest technologies. By joining forces, we have created a unique total experience. In this, physical production and digital enrichment go hand in hand, truly creating an experience.”

The banknote is a limited-edition production and will be available from February 7th via the webshop www.nickensimontientje.nl